The Sympathizer – An Exquisite and Acute Political Satire 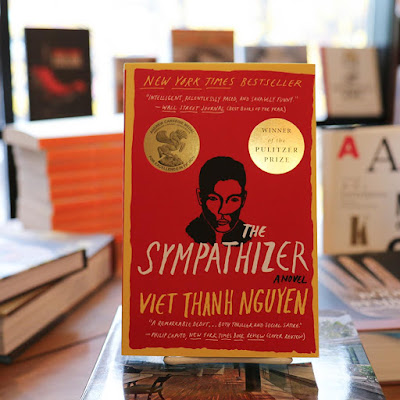 We were displaced persons, but it was time more than space that defined us. While the distance to return to our lost country was far but finite, the number of years it would take to close that distance was potentially infinite. Thus, for displaced people, the first question was always about time: When can I return?

“My book has something to offend everyone”, says Viet Thanh Nguyen, an associate Professor of English, American Studies and Ethnicity at the University of Southern California, whose debut novel 'The Sympathizer’ (published April 2015) went on to win the Pulitzer Prize for Fiction. Nguyen’s tale unfurls in the form of extended confession, written by an unnamed North Vietnamese spy or agent, simply addressed as ‘The Captain’. He works his way inside military and security establishment in Saigon, South Vietnam. After the city’s fall in 1975, he gets relocated to California with The General, and on the orders of North Vietnamese high command, the agent monitors the activities of the displaced members of southern Army. The Sympathizer is equal parts farcical spy story and a treatise on perplexed refugees, narrated through a beguiling voice that’s richly atmospheric, incendiary, poignant, and utterly unforgettable. In fact, the morally conflicted narrator draws comparison to the anti-heroes of Graham Greene and John le Carre. Nguyen’s revulsion and rage aimed towards the hypocrisy and idiocy of power-hungry humans also partly reminded me of Louis-Ferdinand Celine’s ‘Journey at the End of the Night’.

Nguyen says that his unnamed spy protagonist was inspired by a very famous spy named Pham Xuan An, who studied in Orange County, became friends with many Americans, and was silenced after the war. While there has been plenty of Vietnam War books from the perspective of the U.S. soldiers, and even few novels/memoirs depicting the Northener’s view of war (for eg, Last Night I Dreamed of Peace), The Sympathizer is unique because it’s narrator is knowledgeable enough to address and criticize all parties involved (in the war), and their dubious, extreme ideological fervor.  The Captain views himself as a committed communist, and yet he holds sympathy for the people he shadows. Moreover, his westernized internal culture alternately respects and hates what the western nation promises. If the Captain often feels that he is constantly in a position of conflict, belonging nowhere, it’s not just because he’s a spy. The Captain is of mixed-race heritage -- the bastard child of a French priest and a poor Vietnamese maid – making his loneliness not only professional, but existential.

The Captain’s only solace in life is the friendship he shares with Bon and Man, the trio sworn to be blood brothers way before their hardened teenage years. Now in his early 30s, The Captain works as personal aide to The General, the head of the South Vietnamese National Police. The novel opens with Saigon, the last stronghold territory of the South, falling into the hands of Viet Cong (in April 1975). The General has arranged a safe passage to US through CIA for his family, selected officers and their family. Forever leading an isolated life, the Captain decides to bring friend Bon and his family with him for US exile. Unbeknownst to Bon (a patriotic South Vietnamese soldier), and others the Captain is advised to go deep undercover by his handler (Captain has once studied college in US), who is none other than his other childhood friend Man. The Captain must report back on the activities of the General and American diplomats through coded letters. He dutifully reports the General’s attempts in California to raise a small army of expats, with the help of CIA and a Congressman, to liberate Vietnam from the communists.

Confined to the suburbs of California, the fascinating middle-part of The Sympathizer turns the simple spy premise into a much complex commentary on refugee experience in American soil. By employing well-calibrated witty invective, our narrator deeply mocks the American dogma, its xenophobic authority, and penchant for cultural mores. In a branched-out story-line, the Captain becomes advisor to an American director, who is making a Vietnam War movie titled ‘The Hamlet’. The Captain contests with the Oscar-winning director (addressed simply as ‘The Auteur’, a reference to Coppola and his 1979 movie Apocalypse Now) to at least include a single Vietnamese voice in a movie about Vietnamese war. Parts are eventually created for Vietnamese characters, although the Captain is sneakily overpowered by the machinations of Hollywood. Author Nguyen directly quotes Coppola’s speech at Cannes (‘My movie is not about Vietnam; it is Vietnam’) as the words of ‘Auteur’ and depicts how the wonderful artistic work is problematic, in how it represents the Vietnamese or the whole of Southeast Asians. In an interview, Nguyen remarks that he has a ‘respect/hate relationship’ towards ‘Apocalypse Now’, and further adds that “the movie is a condemnation of American behavior, but also keeps the focus on Americans, since for Americans, it’s better to be the villains or antiheroes of their own story than to be the extras.” Equally hilarious and thoughtful is the Captain’s belief that Hollywood as part of the American political-military alliance:“Movies were America’s way of softening up the rest of the world, Hollywood relentlessly assaulting the mental defenses of audiences……… The point was that it was the American story they watched and loved, up until the day that they themselves might be bombed by the planes they had seen in American movies.”

Although The Sympathizer’s most subversive prose are reserved to the ugly pretensions of American imperialists, Nguyen remains unsparing towards atrocious principals of communists, and the cruelty of his own people. Not only the author exposes the worst of humanity in different quarters, he also avoids instilling unnecessary pieties to either Western or Eastern characters. The novel’s most harrowing third-act is an intimate study of the great disillusionment of revolutionaries, whose radicalized behavior wreaks havoc in both success and failures of the revolution. For the most part, Nguyen’s story and writing is very well-paced that it’s hard to not lose yourself to the progressively unfolding drama, abetted by funny ripostes. The Sympathizer, however, isn’t just a cerebral, literary thriller that only works on the surface. On closer reflection, we could identify profound treatment of universal themes like war, immigration, and displacement as well as personal themes, relating to memory and identity. The later themes lead to a satisfying conclusion that acknowledges solidarity, the need for compassion as opposed to allegiance for debased ideologies. The final outlook offers a bit of hope and a promise for possible redemption, even though the cauterizing experiences of war wouldn’t easily vanish. Altogether, Nguyen’s The Sympathizer (384 pages) is an incredible historical fiction, equipped with enlivening and raging high-brow style. The multi-faceted novel fills a vacuum in the ‘immigrant experience’ stories, providing voice to the oft belittled, caricaturized characters.

Viet Thanh Nguyen: "The Sympathizer, Memory of the Vietnam War"