City of Thieves – A Smart and Tragicomic Buddy Story 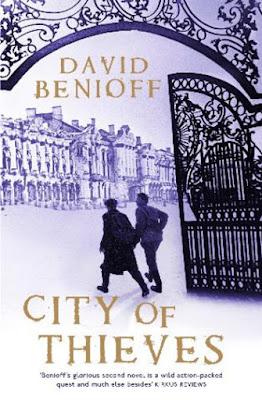 A former English teacher, a nightclub bouncer, a DJ, and a wrestling coach, the list of odd low-end jobs David Benioff committed himself to now brings more fascination to his current famed roles of author, screenwriter, and TV series creator. Benioff’s first novel 25th hour (published January 2001) was adapted into a movie (script penned by Benioff himself) by Spike Lee. Later, he worked as a screenwriter for notable features like Troy, The Kite Runner, and X-Men Origins: Wolverine. He hit his career high with the creation of groundbreaking TV series ‘Game of Thrones’ (alongside D.B. Weiss). Now there are talks of Benioff and Weiss writing and producing a new series of ‘Star Wars’. But a decade back, before his involvement in Game of Thrones and the disappointment of X-Men Origins, Benioff wrote a splendid historical novel titled City of Thieves. It’s a buoyant, snappy tale of friendship set during the German army's 900-day siege of Leningrad during World War II (between 8 Sep 1941 and 27 Jan 1944).

“The arithmetic was brutal, but brutal arithmetic always worked in Russia's favor” says the central character Lev Benioff, a statement that perfectly sums up the prolonged, punishing military blockade in history of the war. By the end of the siege, 632,000 to 1,000,000 city residents were believed to have died, the reasons ranging between starvation, artillery attack, etc. City of Thieves, however, isn’t a novel that sheds light on the full horror on the siege (there are plenty of historical books to do that job). It’s simply a moving coming-of-age story, duly amplified by the war backdrop. Benioff plotting sense wavers between realism, fairy-tale notions, and grim sense of humor. The novel is at its best when it elucidates the absurdities of war and horrors inflicted upon the harmless, civilian populace. It satisfyingly clubs together black humor, pathos, and brutality that often punctuates the climate of war. Yet the narrative devices and moral lessons are cloyingly Hollywood-ish at times. Being a screenwriter, Benioff has written the story in three acts with neatly sketched characters and a sort of happy ending. Many of the motifs and imagery in the novel aren’t exactly fresh. Nevertheless, I enjoyed reading this light-hearted tale, although a part of me questioned the nature of crafting harmless entertainment from the real, deep suffering of war-afflicted populace.

City of Thieves starts with an interesting prologue: a screenwriter named David, curious about his grandfathers’ tantalizing World War II experiences in Russia, visits him and records his tales. The screenwriter says he has filled a week’s worth of tape, and yet expects to smooth few gaps and inconsistencies. He persistently asks the grandfather, “A couple of things still don’t make sense to me…” The grandfather interrupts him by remarking, “You’re a writer. Make it up.” Thus begins the dreamy, devastating, and humorous tale of the skinny 17-year-old Lev Beniov, set in the winter of 1942, during the Nazi siege of Leningrad aka Piter. Naturally, readers would assume that the screenwriter is David Benioff himself and City of Thieves is a slightly embellished real-story of his grandfather Lev. But this imaginative prologue is just written to hook-in the readers, similar to Coen brothers’ ‘This is a based on a true story’ declaration in the opening credits of Fargo (1996). All the four grandparents of Benioff were born in US, and the whole tale is product of the author’s imagination.

Lev is the son of a mildly famous Jewish poet, who is arrested by secret police (4 years earlier) and duly executed. Lev’s mother and sister have left Leningrad, but he determinedly stays in the city and dreams of being a proletarian hero (a “Nevsky for the twentieth century”). But Lev is no hero. He is just an anxious virgin with a penchant for playing chess, and crushes on his cello-playing neighbor girl. One day, Lev and his friends spot the corpse of a German parachutist floating down from the sky. The starved young gang drinks the dead soldier’s cognac, while looting his possessions. Lev steals the knife, but soon he is rounded up by the Red Army and spends the night in a dark cell. His cellmate, Kolya is a handsome braggart and a Red Army soldier, who says he has been unjustly charged with desertion.  They both know that execution is imminent, probably in the early morning. However, the duo has a shot at redemption. A local army colonel’s beautiful daughter is getting married, but there are no eggs in Leningrad to prepare the wedding cake. Lev and Kolya are sent on a mission with a curfew waiver, and 400 rubles to find dozen eggs in the next five days. The wild goose chase of a journey makes the ragtag pair to confront cannibals, a cabin full of concubines, band of partisan fighters, and even a feared leader of the Nazi death squad (Einsatzgruppen). Throughout Lev and Kolya’s search for a poultry collective, we come across the dire atrocities of war: huge apartment blocs collapsed to the ground, dogs strapped with dynamite to blow up Panzer tanks, snack made from books’ binding glue (known as ‘library candy’), and many more.

For the most part, Benioff sharply blends in passage of humor and horror. Kolya’s boastful mini-lectures convey the whole spectrum of emotions – despair, courage, sex, and love – oft bridging the barriers between the characters’ emotions and readers. Of the many motifs in the novel, the one I found fascinating is Kolya’s love for author Ushakovo and his novel ‘The Courtyard Hound’. At one point, Lev realizes that there is no Ushakovo and comprehends how it’s a harmless lie, designed by Kolya to protect his pride. Both Ushakovo and Courtyard Hound’s protagonist Radchenko happens to be an idealized, romanticized version of Kolya. This particular invention shines light on Kolya’s central character trait or possible fragility: fear of embarrassment which dominates his other fears (including the death). Lev relates Kolya’s vulnerability with the frustrated authors and poets of his father’s literary circle. Hence, the non-existent novel beautifully symbolizes our search for avenues to escape the reality’s horrors (and also pays tribute to the sprawling Russian literature). 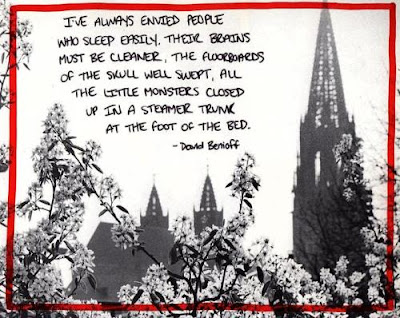 Benioff packs off the novel with many other foreshadows and symbolism, the prominent ones being the eggs and the knife; one standing-in for the delicate nature of life and the other representing the ubiquitous presence of death and human suffering. As I mentioned earlier, the novel might seem too neatly stacked for some readers, especially its simple-minded narrative device to embody the whole immorality of the war through the German character of Abendroth (I didn’t like those climactic turns). All such strictly packaged Hollywood notions make City of Thieves excessively dramatic (particularly towards the end). David Benioff should have been aware of these criticisms. Hence he tries to answers our misgivings through his novel's character itself, “What's wrong with drama? If the subject demands intensity, it should get intensity”. On the whole, it’s a thrilling, bittersweet coming-of-age tale, encompassing the monumental events of history.