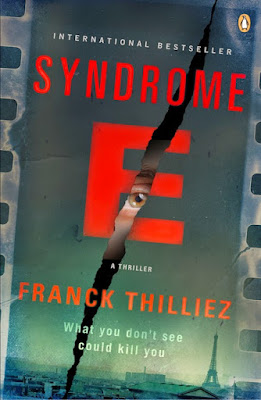 Gallic author Franck Thilliez’s crime novel possess the strong flavor of Nordic Noirs, featuring beleaguered detectives and complex, decade-spanning crimes. Syndrome E, the 3rd book in his Franck Sharko series, was the first of his novel to be translated to English and published in US. It’s a scientific thriller/mystery which moves at a breakneck pace and contains intricate, shocking plot twists. Immediately after its US publication (in 2012), Paramount Pictures bought the rights, and ‘Black Swan’ screenwriter Mark Heyman has developed the script. Syndrome E introduces us to Inspector Franck Sharko of the Paris Bureau of Violent Crimes. He is a criminal profiler in his early 50s, who is hinted to have faced a hugely traumatic personal loss. The other central character in the novel is Lucie Henebelle, a thirty-something lieutenant in the Criminal Investigations unit of the Lille Police Department and a single mother.

The book’s primary hook is an unidentified, mysterious experimental silent film made in the 1950s. The film is purchased by Ludovic, a passionate film buff, who immediately after seeing the ad for sale, drives to Belgium. Ludovic finds the aforementioned unknown short silent feature amidst few other cherishable film rolls. Mr. Spzilman, the octogenarian who owned these treasures, has recently passed away and his aloof son can’t wait to dispose the old items. Ludovic comes back home and plays the silent feature in his mini-basement theater. One of Lucie Henebelle’s twin daughters has health problems and admitted to a hospital, while the other one is far-off in a summer camp. Lucie, who is actually in her vacation, sleeps by her girl’s bedside when a call disturbs her. The voice at the other end is panic-stricken and she identifies it as her ex-lover Ludovic’s voice. He says that he has been struck blind while watching a disturbing film from the 1950s.

The doctor’s diagnosis is hysterical blindness. It is triggered by unimaginably depraved subliminal images, embedded within the short silent film. The description of the silent movie-reel makes us think about Luis Bunuel’s surrealist short Andalusian Dog (1929), the close up image of a hand slitting the human eye is evoked in it. Lucie Henebelle watches the plot-less silent short and she’s also profoundly disturbed by it, although she couldn’t perfectly pin-point the reasons. Intrigued by the violent images on-screen, Lucie decides to trace the film’s origin and the reasons for making it. Meanwhile, Franck Sharko is assigned to investigate a gruesome murder case. He arrives at a construction site, where five mutilated, decomposed corpses are recently unearthed. The bodies are nearly unidentifiable as the brains, eyes, and hands are missing.

Inspector Sharko is a broken man, who is suffering from mild hallucinations, prompted by the cruel circumstances surrounding his daughter and wife’s death. Nevertheless, he is a talented criminal profiler whose investigation is boosted by the connection made to a similar case in Egypt (three girls are killed in the same fashion in 1994). Tenacious in pursuing the leads, Sharko decides to visit Egypt. Before the trip, Lucie meets Sharko after finding a solid connection between the mysterious silent short and five corpses. To Lucie’s dismay, the film historian who analyses the short is also brutally murdered and the film is snatched away by the murderers.While Sharko uncovers a vast conspiracy behind the murders in Egypt, Lucie traces the film’s origin to Canada, which is made by a unknown, radical Parisian film-maker named Jacques Lacombe. Throughout the investigations, the duo comes across the term ‘Syndrome E’. The term strongly connected to the fields of psychiatry, neurosciences, and history seems to hold the answer to all this unhinged brutality.

The novel moves back and forth between continents (France, Canada, and Egypt) and time, exposing a possible web of conspiracy involving the religious, military and political institutions (of different nations). The idea behind ‘Syndrome E’ may look a little far-fetched, but the mind control experiments and theories on the power of subliminal images are very much grounded in facts and scientific discoveries. Furthermore, Franck Thilliez’s byzantine plotting technique and fast-paced writing completely enshrouds us within the eerie psychological enigma. Since the story revolves around subliminal images, the writing is highly visual, riddled with sneaky little details.

The term ‘Syndrome E’ was actually first widely known after Professor Itzhak Fried’s 1997 paper on the phenomenon of mass murders. Why would a normal educated guy withdraw from his life and end up in a video hacking a man’s head in the name of jihad? Why a shy, silent boy in high-school would gunn-down his fellow students at the school premises? From the era of Nazis to ISIS, the question of what turns a simple person into a dangerous killer continues to perplex the great minds studying human behavior. While such evils are oft attributed to debased ideologies and rigid societal beliefs, the Syndrome E offers a radical and controversial take on the nature of evil. As a crime thriller novel, Frank Thilliez ends his story with a well-packaged, if not a little disturbing, resolution. But the idea that evil could be pathological induces a lot of easily unresolvable questions about humanity, state power, and freewill. Altogether, it’s a puzzling science-thriller with fascinating detective characters and thought-provoking mystery at its center.